The following article is a guest submission from current Victoria Stilwell Academy Dog Trainer Course student Ruth Hegarty about how her relationship with her dog led her on a journey to become a professional dog trainer with VSA. 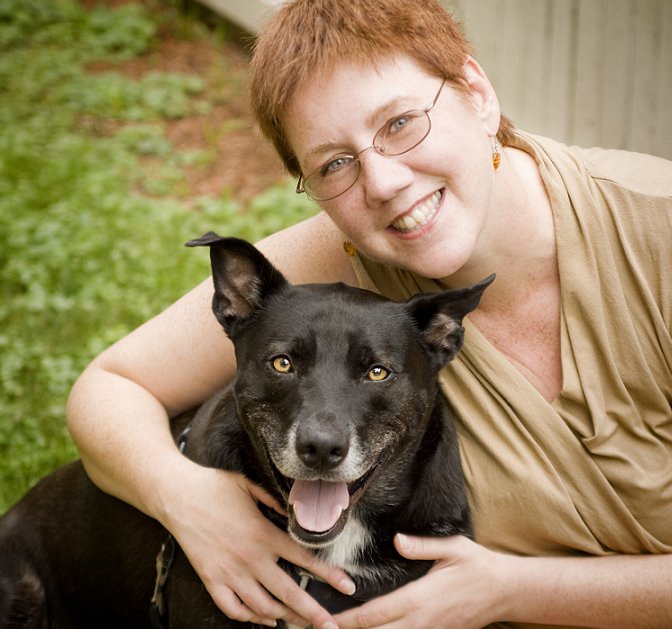 Although It seems like yesterday, my journey to become a dog trainer began years ago when I started looking for more humane ways to train my own dog. I adopted a feral dog in 2010 with no idea what that meant. His name is Jake and the minute I saw him I fell in love with his smile. The minute I got him home, however, I realized that it wasn’t going to be an easy task to train a fifty-pound dog that had only ever lived wild in the woods of Virginia. It might not have been so bad except that in his efforts to adapt to his new life he would knock me down to steal my food, bite me and generally scare the heck out of my whole family.

I persevered reading books and articles online, watching videos and generally trying to learn everything I could about how to “make him behave.” I took him to the local dog park which he enjoyed until he was attacked by another dog. After that Jake became dog aggressive and would snarl and lunge toward any dog he saw on our walks. He developed a fear of vehicles after we almost got hit by a car that drove up on the sidewalk which caused him to also lunge at cars on our walks. Since he hadn’t been socialized as a puppy, he also has a near zero tolerance for novelty of any kind. Of course, what I knew about socializing a dog in those days could have fit in a thimble.

I decided I needed professional help so I enrolled in a couple of different obedience classes and even worked one-on-one with a trainer. At that time, I knew nothing about traditional versus positive reinforcement dog training and the trainers I went to were all traditional trainers. I was scolded for not being the “alpha” to my “dominant” dog and advised to use a firm hand and apply punishment in order to get respect from my stubborn dog so he would behave the way I wanted. I’d like to say I saw those recommendations as the bad advice they were but I did not. I gave it all a try. I pulled, choked, shocked and yelled at my dog until I felt like a monster. My poor dog was still afraid of dogs and cars and now maybe a little bit of me, too.

I decided I’d rather have a completely untrained dog than one who’d been mistreated into submission so I quit using all of those techniques. Luckily for both Jake and myself our “back to the drawing board” moment led to the discovery of clicker training. Could I really teach my dog using treats as a reward? Turns out, I absolutely could. Not only did positive reinforcement training (as I came to discover it was called) make me feel better about how I treated my dog, Jake absolutely loved it! I realized the dog the trainers called “dominant” and “stubborn” was really a sensitive, intelligent creature who wanted to learn and have fun with me. He was a good dog who had had some bad experiences and a human who didn’t understand how to communicate effectively with him in the beginning.

Now, at nine years old, Jake is a sweet, well-mannered dog with a happy life. He’s still afraid of dogs and cars but not nearly as much and we still work on it. He still loves our training sessions and still has the gorgeous smile I fell in love with that October day we met.

The more I learned about positive reinforcement, the alpha myth and how dogs think and learn, the more I wanted to spread the message. Then I learned that a lack of training is the main reason owners surrender their dogs to shelters and I remembered that I’d considered returning Jake to the shelter in those first few months. That statistic set me on fire to provide training for adult rescue dogs and their humans so that a lack of training wouldn’t come between them. I researched dog training schools and came across the Victoria Stilwell Academy which resonated with me because of the emphasis on understanding how dogs learn and seeing each dog as an individual. I’d also read one of Victoria Stilwell’s books while learning positive reinforcement training on my own and really liked how she explained everything. As I worked the numbers to see how long it would take me to save up the tuition and vacation time I would need to attend the program, the online course launched. I took the sample course and found the program rigorous and well supported. I signed up for the full course before I even finished the sample one! Down the road I’d still like to take the in-person course but the online program has been in-depth, my advisor has been indispensable and my dog has gone from being afraid of the camera I bought to film my assessments to getting excited when I take it out because he knows we are going to “play.”

I have learned so much over the months I’ve been enrolled in VSA’s Online Dog Trainer Course. My dog and I have both grown in confidence and I’ve been able to live my dream of helping adopted dogs stay at home by working with shelters and training dogs and their families in my community. I marvel often about how my dog has blessed my life with love, challenges and a new career. I could never have imagined that day I walked into the shelter that I’d be writing this today.