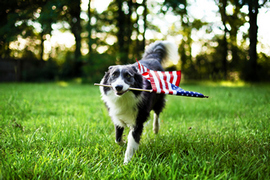 Banzai has always been a happy boy! Of all the activities he does, his favorite two things are Dock Diving and Earthdog. It’s the perfect way to turn his high energy into passion.

Victoria and Aly talk about how to be more effective when learning and working from home. Social distancing is the thing these days, but how do we keep from going nuts and what are the best practices to stay productive and efficient when working or learning from home. Dealing with the social aspect of isolation. Aly shares some top tips for how to be productive while staying home, including staying engaged and avoiding passivity. The use of rituals of physical, technical and mental preparation in staying efficient at home.

I won’t ever forget the faces that stared at me as I approached them; faces of dogs that had been subjected to a life of neglect and abuse at the hands of a cruel, relentless industry.  No one can truly understand what it’s like to be on a dog meat farm until they have experienced it for themselves. I’ve assisted on multiple US based puppy mill and dog fighting busts and rescues, and I thought I’d seen it all, but as I looked into the eyes of the Asian meat dogs, I realized that I hadn’t. Whatever cruelty and neglect I had seen, this was ten times worse.

There are thousands of dog meat farms in South Korea, but thanks to the tireless work of Humane Society International (HSI) as well as newer generations of South Koreans speaking out against the industry, the dog meat trade is dying. Older generations, however, still consume dog and cat meat and younger people will also eat meat out of respect for their elders, so education is still greatly needed.

I’ve been invited to South Korea by HSI to take part in a dog meat farm closure, and that is why I find myself flying 14 hours from Atlanta to Seoul, to meet TV vet and campaigner, Marc Abraham; Director of International Media for HIS, Wendy Higgins; and Executive Director of HSI/UK, Claire Bass. Together we join the rest of the International team and travel outside Seoul to the countryside where multiple dog meat farms are located. 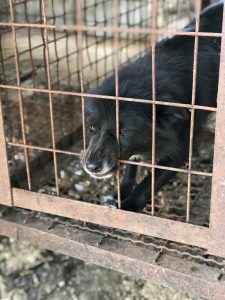 Dog meat has been eaten for centuries in South Korea and other Asian and African countries, but as pet ownership gains popularity and social media exposes the cruelty and criminality that surrounds the dog meat trade, the industry has begun to decline. Dog meat is no longer a profitable business in South Korea and farmers are losing money, but rather than just taking away what is left of a farmer’s livelihood, HSI does something extraordinary by helping farmers transition away from dog meat to a more profitable, humane business model – most notably, some kind of plant based agriculture. Each farmer plays an integral part in his farm’s closure, after signing a legally binding contract saying he will shut his farm down permanently.

Many dog meat farms do more than just sell dogs to be eaten and it is common for these farms to fulfill many roles. Jindo dogs are bred for meat; dogs of all breeds will also be eaten but many will provide puppies for the pet store industry, and some breeds like the Japanese Tosa are bred for fighting. These beautiful majestic animals are regularly found with heavy scarring from past fights, or pregnant so that puppies from champion fighting lines can be sold for a large profit.

If this sounds like hell, it’s because it is. We find dogs crowded into small cages surrounded by disease, stress, death, rodents and biting spiders. They stand with their paws splayed apart on wire floored cages with piles of excrement on the ground beneath them. Some of the larger dogs are chained to posts dug deep into the ground where there is no escape from the extreme heat of a Korean summer or devastating cold of winter.  Many dogs die when temperatures rise or plummet.

The only way dog meat dogs leave their cages is when the trucks come to pick them up and take them to market. Dogs of all ages and sizes are crammed into tiny crates and shipped to meat markets to be killed by electrocution in South Korea or beaten to death, hanged or boiled alive in other Asian countries, such as China. It is believed that if a dog dies in fear, the adrenalin that surges through the dog’s body will tenderize the meat and this meat will in turn increase human male virility. This is especially true for the dog meat festivals in China, including the notorious Yulin festival that takes place around the summer solstice. Tens of thousands of dogs are killed during Yulin and more in other lesser known festivals around China.

The dog meat trade lies to its consumers. The industry tells people that there is a difference between meat dogs and pet dogs. Meat dogs such as Jindos and Tosas do not have souls and it is therefore ok to eat them. HSI educates the population that ‘all dogs feel pain and suffer in the same way.’ 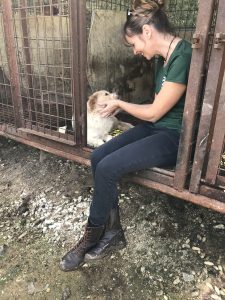 Ending the dog meat trade is not just an ethical issue. The World Health Organisation warns that the trade, slaughter and consumption of dogs poses human health risks and can transmit severe diseases to humans such as cholera, rabies and trichinellosios through raw or undercooked meat.  More and more people across Asia are opposing the trade because of these human health concerns, as well as the cruelty that is being exposed through the media and the crime that goes hand in hand with it. Pets including dogs and cats are regularly stolen from people, especially around meat festival time. Cats are also farmed and eaten.

But there is light at the end of this long, horrific tunnel. There is a light for the dogs on the farm we visit as we take them out one by one and transfer them into crates for the long journeys they will take to their new homes in the UK, USA and Canada. These are the lucky ones and even though the transition is stressful, it’s worth it for the change that will occur when they get to their new homes or rescue centers for rest and rehabilitation before adoption.  But we visit another farm that is even worse than the one we are working on. Negotiations are just starting with this farmer, but because there is so much organization that goes into a dog meat farm closure, it can take months to set up. I don’t know if the dogs I’m seeing in this farm will make it and until HSI can get there, many of these dogs will already be sold for their meat. These are the faces that will never leave me. 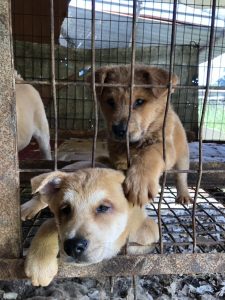 Dog meat bans exist now in Hong Kong, Taiwan, Thailand and Singapore. Indonesia has pledged support for a ban, but South Korea and China are still major offenders. Humane Society International will be on the front lines of the fight in South Korea until the industry is banned. Nara Kim, a Korean dog meat industry campaigner for HSI states that, ‘There is a willingness within the industry to phase out this trade……. More Koreans than ever before are speaking out against the dog meat industry and pressure is building on the government to phase out this cruel business.” Change is coming and Humane Society International is working alongside their Korean partners to find solutions that will end this brutal trade for good.

With much love and patience, Riley blossomed into the sweetest, most loving dog. He makes his whole family smile every time they see him.

Bree has been enjoying extra love and hugs while the family is cooped up together during the pandemic, she’s happy to keep her family laughing and smiling.

When you’re working with a dog, you can start your approach with different mental frameworks, and any of them is likely to get you where you want to go.

Emotions – what do you think the dog is feeling? If it’s negative, what can you do to change that? For example; Dog is running through the house barking hysterically. What is the dog feeling that is causing that? Happy and excited? Fearful? Frustrated? Address the underlying emotion and the behavior will improve. If I think the emotion is negative, I’ll probably work pretty hard to fix that rather than worrying about what I see or the dog’s arousal level. What can I do to make the dog feel better? Better behavior and arousal will follow if you get the dog in a positive emotional state.

Behavior – Dog is running through the house barking hysterically. What are you observing? Feet moving! Dog zooming! How can you change what the dog is doing? Likely you will focus on identifying what happened before it all started up and intercede at that point. You may give very little attention to guessing about how the dog is feeling emotionally – just change the behavior itself.

Arousal – Dog is running through the house barking hysterically. What is the dog’s arousal level? High! What knobs can you turn that will bring down that level of arousal to what you want to see in the house? Can you intercede at the point (in the future) where you notice the arousal level escalating? Change the arousal level and better behavior will follow.

What is interesting is that any of those three is perfectly likely to work and may give you the same plan. And ideally, you are aware of all three frameworks when you’re trying to change behavior.

For Dice, I find it helpful to think in terms of arousal – if I drop his arousal level there is no problematic behavior and that simplifies the process in my head. Of course, I’m observing behavior and I’m aware of what emotions might be behind that behavior but they are not my focus.

And when I’m training skills I tend to think in terms of all three – emotions (is he enjoying this?) arousal (Right motivator for the task at hand?) and behavior (do I like what I”m getting here?) Probably of the three my greatest focus is on emotions – if I keep him happy I can get the right arousal level easily and behavior is the least of my worries – happy dogs in the right arousal state are very easy to train for skills.

These are interwoven ideas. Any of them can get you from here to there – which is most comfortable for you?

Words matter. Frameworks matter – they set how our brain proceeds and pull our attention. Not good or bad but interesting to contemplate.

POSITIONING THEMSELVES FOR REINFORCEMENT First off, sorry. The title was designed to get your attention. We cannot forget about stress and anxiety but rather than focus on those conditions we assume a dog is experiencing, let’s get down to the business of behavior. It has been important that people have been encouraged to […]

POSITIONING THEMSELVES FOR REINFORCEMENT First off, sorry. The title was designed to get your attention. We cannot forget about stress and anxiety but rather than focus on those conditions we assume a dog is experiencing, let’s get down to the business of behavior. It has been important that people have been encouraged to […]